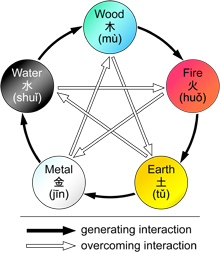 An mo (按摩) means massage in Chinese.
The massagean mo is a Chinese specificity that takes into account the meridians and acupuncture points of the body, it is part of Traditional Chinese Medicine (TCM). It would act on reflex zones to tone and stimulate the body and mind. Its objective is to circulate and rebalance the energies.
The Anmo was created around 1300 BC. AD in the center of China, in the ancient capital of China, in Luoyang (Henan).

The six climatic energies refer to wind, heat, lukewarmness, drought, cold and humidity. According to the Shiowen Jiezi Han Dynasty dictionary, the six energies are the expression of the dynamic transformation Yin and Yang in Heaven.

According to Chinese tradition, the living being, and here more specifically man, is an organization resulting from the combination of matter - the physical or physical body - of yin nature, and of energy - which animates matter - of nature Yáng. The harmonious balance between these two components determines the state of health. Perturbations of this balance are responsible for the disease. The energy circulates in particular along ducts called meridians, and, from these meridians, spreads throughout the body to infuse its vitalising principle (yáng) to all the constituents of the organism. It has a certain correspondence with the blood, which itself circulates in vessels and spreads throughout the body to irrigate it from its yin principle. The equilibrium of the human organism must always be evaluated in relation to that of its environment and cycles that will rhythm its evolution, cycles with which it must remain in harmony and whose material correspondences (the five elements: Wood , Fire 火, Earth 土, Metal 金, Water 水) will serve as a reference point for the acupuncturist to establish his diagnosis and treatment, according to subtle rules that originate in Taoism.

Movement and its perturbation princeps will be the hindrance to movement: blockage. The energy blocked in a region of the material body accumulates upstream of the blockage, while the regions downstream of the blockage will be in energy deficit. In the presence of a state of pathology thus described, it is sought to establish a diagnosis by looking for the levels at which the energy is blocked, and what is the reason for the blockage, and then to apply a treatment that removes the blockage and corrects the reason for this Blocking.